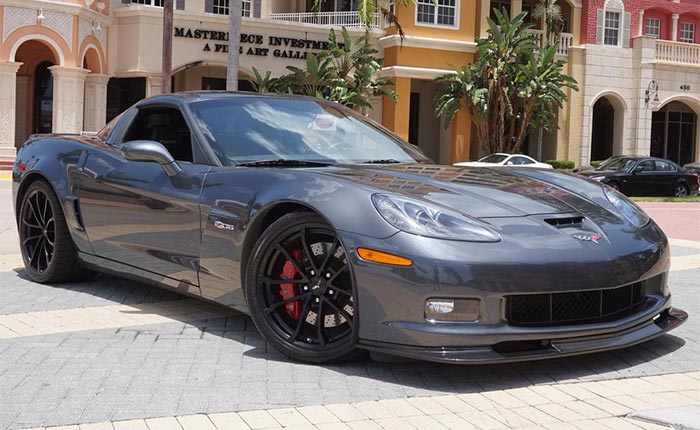 From 2006 through 2013, Chevrolet minted a total of 27,995 C6 Z06s out of the famed Bowling Green Assembly Plant. After just one year off between generational turnover, the Z06 badge returned to the Crossed Flags fold in 2006, and it came out of the gate swinging. During its inaugural model year, the C6Z accounted for 6,273 of the Corvette’s 34,021 total sales. That was an increase of 590 units or 10.4% over the strong selling 2004 C5 Z06. Its sophomore outing was the banner year for C6Z sales when the model tallied an impressive 8,159 deliveries. That was followed by an impressive total of 7,731 sales before the economy and a slew of other widebody C6 variants conspired to cannibalize large chunks of the Z06 market. 2009 was the final time that the LS7 monster hit the four-digit mark, finding 3,461 new homes before wrapping production with yearly totals that put the later examples in the rarified air of exclusivity (518, 904, 478, and 471, respectively). 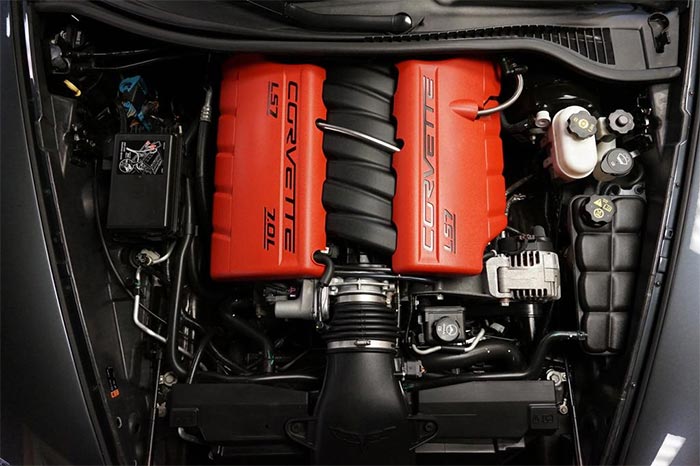 Like the C5Z before it, the C6 Z06 hit the scene with a limited color palette. Six of the base car’s eight possible hues found their way into the Z order book. Three of those colors made up just under 70% of orders. Black was the most popular color that year, followed by Velocity Yellow Tintcoat, the only color that made it through the entire production run. Victory Red earned a first-year bronze medal and worked its way up to second place the following two years. The rarest 2006 color was the Daytona Sunset Orange color that was retired before year two after just 282 Zs received the paint.

A newcomer was the third and final 1,000-seller in 2008 (joining Black and Victory Red) when Jetstream Blue notched 1,006 sales in the Z’s last year as the only hi-po trim in the ‘Vette hierarchy. Unless you count the second limited edition, Atomic Orange found itself in the basement again in 2008 with 516 sales. The 427 Special Edition tribute to long-time plant manager Wil Cooksey used Crystal Red undercut Atomic by 11 pre-planned units. Previous top-three finishers, Velocity Yellow and Machine Silver, tapered off by this point, winding up in the lower-middle portion of the pack at 898 and 819, respectively.

As alluded to in the ’08 section, even black fell under the 1,000-sales mark in ’09 when it led with 904 orders. That was followed by another new kid on the block when Cyber Gray Metallic took a commanding lead over third-place Victory Red 793-624. In its final outing, Atomic Orange achieved a personal worst and made it a last-place trifecta with a year-end total of just 191 units. Two less-heralded special editions hit the scene in 2009 with the CSC Competition Sport Edition (available in either Silver or Black) added 20 buyers to the ‘Vette’s bottom line, and just 55 units were attributed to the Yellow or Black GT1 Edition.

2010 is when the Z06 line became really uncommon. Black took the crown with just 130 orders that year. No other color found triple-digit buyers; Cyber Gray was second at 98, and Crystal Red barely edged out newcomer Torch Red 68-66 for third place. JSB and Blade Silver were the rarest 2010s at under 35 apiece.

Things were looking up in 2011 with the introduction of the gap-narrowing Z07 package. 540 super Zs received this performance-enhancing package highlighted by the ZR1 (and Ferrari Enzo)-spec ceramic brakes. Of those, 252 were special Carbon Edition cars that were only available in Inferno Orange or Supersonic Blue -unless your name was Rick Hendrick. With that Carbon-bump, Supersonic dethroned Black as the year’s top seller, and Inferno notched the only top-three finish for any shade of orange in the Z’s entire eight-year run (167 units – 2nd place!). Crystal Red fell all the way to third to last with just 33 orders. The rarest color was Jetstream Blue in its final go on the options list. Blade Silver won the penultimate spot with a buzzer-beater to give it 29 total sales.

Carbon Flash Metallic knocked Black out of the rotation for one year to celebrate Chevrolet’s 100th Anniversary with the Centennial Edition that outpaced 2012’s second most popular color (Torch Red) 3.3 to one (195 to 59). By this time, color options had opened up to a full ten choices while production was under 500 to stay, creating a lot of rare looks. The bottom of the totem pole was the one-year Carlisle Blue that only found its way onto 12 total Zs, making it the rarest overall C6 Z06. Inferno Orange nosedived in ’12, only beating out the silver/blue hue with 16 takers. An additional 117 Z07 supercar-killers were sent into the world in 2012.


Finally, in 2013, the 60th Anniversary Edition helped Arctic White claim its first and only win in the C6Z exterior color popularity contest. 103 of the 128 total ’13 Zs painted AW were 60th SEs. Black was back on the menu, closing out its dynastic run with 123 more sales, giving it a runaway overall victory with 8,074 sales. On the opposite end of the spectrum were Inferno and Supersonic, that only got two and three respective orders before being sent into early retirement.

After Black, the bright reds found themselves in a distant second place overall with 4,950 total sales split 4,682-268, favoring Victory over Torch. With a final reckoning of 4,033, Velocity was the only color to even make it past the 3k watermark. Cyber Gray, Machine, and Blade Silver were the only other thousanders, and, joining Carlisle Blue in the rarest-of-the-rare association was ’13-exclusive Night Race Blue that earned 45 buyers, making it the only other tone with fewer than 100 units to its name.

Whewww! It is easy to get lost in a rabbit hole when talking Corvette colors! On top of the Special Editions and Z07s that are worked in above, we also broke down wheel options and interior colors below (PSA: GM made 2009-11 very difficult on us by combining Z06 and ZR1 reporting, muddling some of our numbers). Unsurprisingly, the race for interior supremacy wasn’t even close. Ebony was selected by a whopping 15,500 Z customers, putting its take rate at over 55%, while the other eight options duked it out in relative obscurity. If you want the rarest interior, look for something called Sienna on the window sticker, only 11 Z06s got that color leather which is similar to the also-tough-to-find “Brick” that didn’t quite make it into 300 Zs as far as we can tell. Between those are 98 Cashmere cars and 103 60th cars that had the special Blue Diamond guts. We will leave you to check in on the wheel section on your own as we don’t want things to get too heated around here! 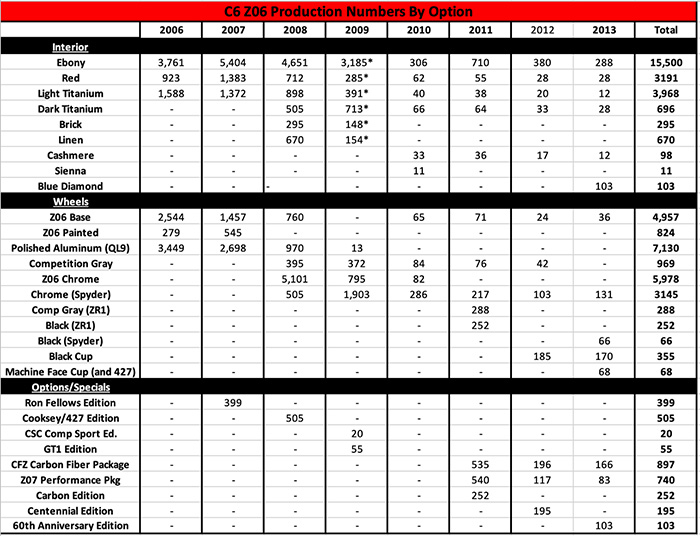 So, that is the complete story of the C6 Z06, but its heart and soul; the 7-liter, 505-horse, 7,000 rpm, first-ballot hall of fame LS7, spread its free-breathing influence beyond the carbon fiber-surrounded engine bay of its original host. Our love for the modern 427 runs so deep that we’d be remiss if we didn’t account for the precious few vehicles that made use of the C6 Z06’s legendary engine. 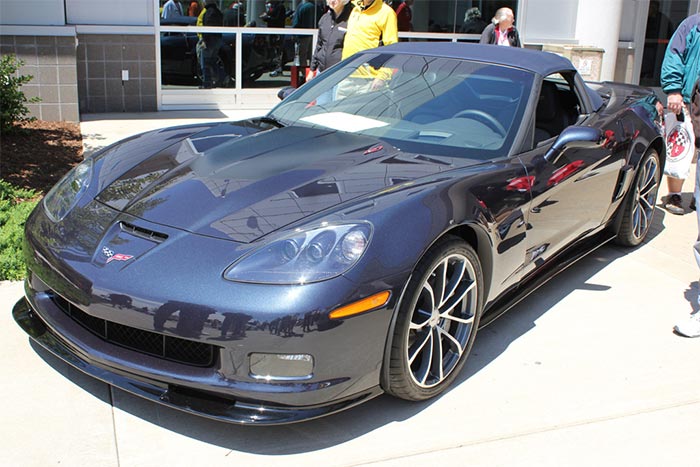 As a sendoff for its sixth-generation, a special model joined the Corvette fold in 2013. It married the gloriously rambunctious LS7 with the roadster body that fans had been demanding for seven years. While it made use of the Grand Sport’s more rigid steel frame, precluding it from being called a true Z06 drop-top, it didn’t give up much in the way of performance. Two thousand five hundred fifty-two of the best Corvette hair dryer in decades would leave the production line before retooling for the C7 began. Of those, a dominant 1,181 were painted in the Arctic White of the 60th Anniversary model (all 60th cars are white, but not all white 427s are anniversary models). Other favorites were Black with a total of 429, Torch Red at 251, and Night Race Blue at 208. Inferno Orange would again claim the rarity championship with just 17 made. Supersonic Blue only accounted for 28 orders, and Blade Silver rounded out the bottom three with 56 total builds. 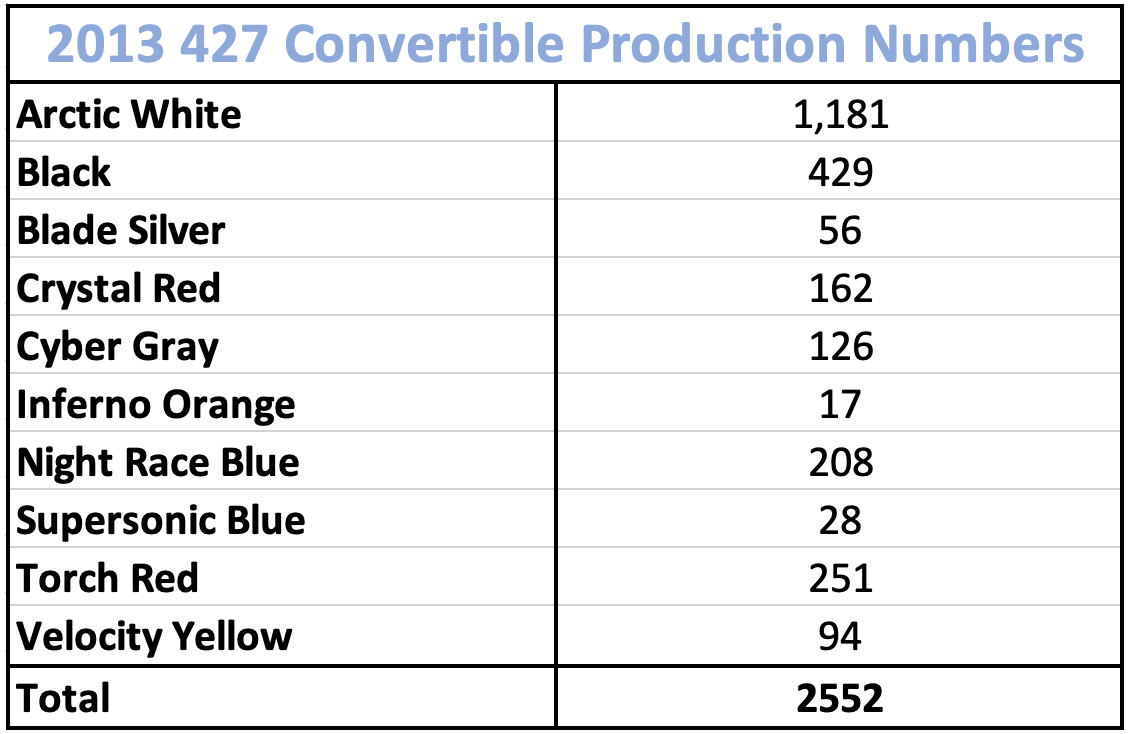 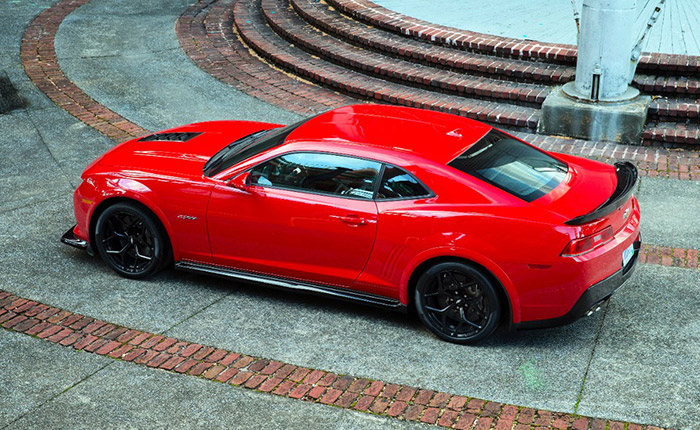 Corvettes weren’t the only vehicles that GM allowed to take advantage of LS7 firepower, either. In a rare move, the General even let the top-tier Camaro employ a more powerful naturally aspirated V8 than its new C7 Corvette halo car. The LS7 soldiered on for two model years in the fifth-gen Camaro’s sublime GT3-style track variant after the C6 Corvette was retired. When the dust settled, a scant 1,807 of these incredible driver’s cars were in public hands. Year one only saw 515 of them completed, and 2015 added 1,292 more. They were only available in Ashen Gray, Black, Red Hot, Silver Ice, and Summit White. Black took the cake in Camaroland too, with 787 total units, followed by White (454) and Red (320). Ashen Gray accounted for 166 orders, and Silver is the hardest to find, with just 80 examples extant. 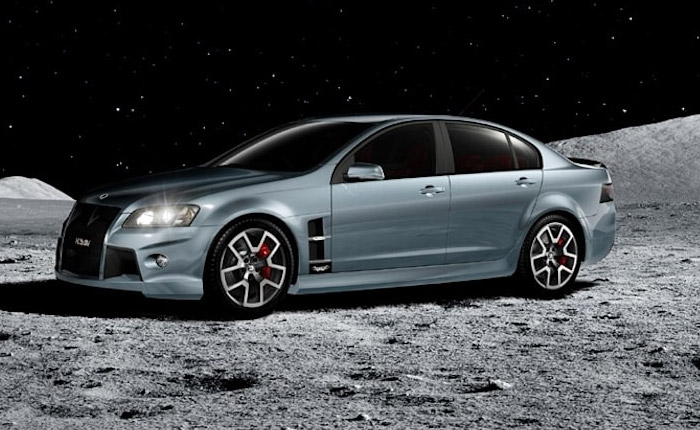 This one is the most obscure, especially in the Corvette’s native country. To help their Australian branch (RIP) celebrate 20 years of their high-performance HSV division, GM gave the green light to the W427, a four-door “E-Series” Holden Commodore with an LS7 heart and a mandatory manual transmission. It was the stuff of car enthusiast dreams and, with a sticker price that eclipsed 150,000 Aussie dollars, it was priced like one too! A limited run of 427 units was planned across two model years in 2008 and 2009, but that staggering price tag and a global economic downturn, just 137 were actually assembled. Like the Z/28 that followed, the W427 was limited to five exterior paints. In a fitting bookend to where we started in 2006, Black was the top choice on the Australian M5 killer, accounting for 44 orders. That was followed by 35 white, 29 Red, 23 Silver, and 6 Gray 427s. There are also reports of two different silver units and a lone Lamborghini Green show car from Downunder. The best news is that in just 11 short years, these amazing right-hand-drive sedans will be legal for US import!